1. A 15-year-old girl in Egypt could face murder charges for killing a bus driver who allegedly attempted to rape her. The prosecution of the teenager, who stabbed the man in July after he allegedly tried to rape her at knife point, has reignited concerns over the treatment of women in Egypt’s legal system. The girl said the bus driver had kidnapped her in a deserted rural area near Cairo and she was only able to get away from the alleged assailant when she took his knife and stabbed him several times. Shortly after her arrest, the 15-year-old was required to undergo a virginity test. When questioned by police, the girl said she was on a date with her boyfriend before catching the bus – a statement that could undermine her credibility in Egyptian society where dating is frowned upon.

2. Indonesia’s parliament has revised the country’s marriage law to lift the minimum age at which women can marry by three years to 19, a move welcomed by campaigners as a step toward curbing child marriage in the world’s biggest Muslim-majority country. Indonesia is among the 10 countries in the world with the highest number of child brides, according to campaign group Girls Not Brides.

3. Hollywood star Brad Pitt has told GQ Magazine that although he called himself an atheist, he never really was. In an interview about his new feature film role in the space drama 'Ad Astra', he said that he clings to religion. However, it's unclear if he practices a faith.

4. Mimzy Vidz, Veedu Vidz, Armin Navabi and Harris Sultan are ex-Muslim activists who wound up in the center of controversy after an image of the four standing on the Berlin Holocaust Memorial went viral. The image and its caption, “With my fellow freedom fighters” immediately sparked outrage with other ex-Muslims, atheists and religious followers alike. People took to Twitter and Facebook to accuse the four of being anti-Semitic, hateful, disrespectful and abusive. Some even demanded the image be removed. Others were able to see the photo in a different light. Some suggested that the four, being from a state of oppression themselves, were inspired by the memorial and stood in solidarity with the victims of the holocaust.

5. Authorities tightened a month-long security lockdown in Indian Kashmir’s main city of Srinagar after breaking up religious processions by Shiite Muslims who defied a ban. A military clampdown was imposed in Muslim-majority Kashmir from Aug. 5 to prevent unrest as New Delhi revoked the disputed region’s autonomy, with mobile phone networks and the internet still cut off in all but a few pockets. Shiite Muslims worldwide stage processions and hold rallies during Muharram, the first month of the Islamic calendar — which started on Sept. 1 this year — to mark the anniversary of the death of the grandson of the Prophet Mohammed. Most such processions have been banned in Indian-administered Kashmir since the outbreak of insurgency against New Delhi’s rule in 1989, on the grounds that the rituals could be used to stoke anti-India sentiment.

6. Defiant Saudi Arabian women have stunned onlookers on the streets of Riyadh by walking around without wearing the customary body-shrouding garments. Despite the risk of provoking arch-conservatives, many women are now leaving their cloaks open in the front or wear them in bright colours. Mashael al-Jaloud has taken the cultural rebellion a step further — she stopped wearing the robe altogether. The 33-year-old human resources specialist strolled through a mall in central Riyadh last week wearing nothing but a burnt orange top over baggy trousers. In the crowd, there were audible gasps and arched eyebrows. Women veiled head-to-toe stared askance. Some mistook her for a celebrity. Last year, de facto ruler Crown Prince Mohammed bin Salman hinted during an interview with CBS that the dress code may be relaxed, saying the robe was not mandatory in Islam.

7. Drone attacks claimed by Yemen’s Houthi rebels struck two key oil installations inside Saudi Arabia on Saturday, damaging facilities that process the vast majority of the country’s crude output and raising the risk of disruption in world oil supplies. The attacks immediately escalated tensions in the Persian Gulf amid a standoff between the United States and Iran, even as key questions remained unanswered — where the drones were launched from, and how the Houthis managed to hit facilities deep in Saudi territory, some 500 miles from Yemeni soil.

8. A Muslim American mayor of a New Jersey town says border patrol agents wrongfully detained him and kept his phone when he arrived at JFK International Airport last month after returning from a vacation in Turkey. Mohamed Khairullah, the mayor of Prospect Park, New Jersey since 2005, told CNN he was pulled aside and detained for three hours by US Customs and Border Protection agents when he and his family got off the plane. They asked if he could give his phone and Khairullah consented, but as the search dragged on, with his family getting restless waiting for him in the area outside the interview room, he asked for his phone to be returned. He said the agent informed him that if he was revoking his consent for them to search his device then they would have to confiscate it. And so they did -- for 12 days.

9. Eddy Piñeiro, an American football placekicker for the Chicago Bears of the National Football League, kicked a long field goal. It was a big moment for him and a huge relief for fans in Chicago. He tweeted, "If you don’t believe in God you better start believing he’s REAL thank you chicago!"

10. Fox News host Tucker Carlson apparently believes the left has instituted a "theocracy run by atheists." Tucker Carlson stopped by Fox News’ The Daily Briefing with host Dana Perino to discuss his new book, but he also took time to explain why certain Americans are concerned with punishing Brett Kavanaugh for an alleged high school sexual assault: it’s all about the “theocracy run by atheists.” 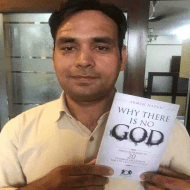