Home
»
News
»
‘Big Tech’ doing the bidding of the Far-Right

I am the President and CEO of Atheist Republic, the world’s largest community of atheists. Our organization is currently involved in a case before the Supreme Court of India. The Indian Government has blocked our Facebook page from all users in India. The Indian Ministry of Telecommunications has blocked our website on several Indian internet service providers. These actions demonstrate the growing destruction of free-speech in the world’s largest secular democracy, a trend also highlighted in the government’s authoritarian reactions to the Farmers Protest.

So here is what has happened; as of Thursday, January 14th, 2021, Atheist Republic's main Facebook page has been completely blocked by Facebook to all users in India.

Screenshots from members in India: 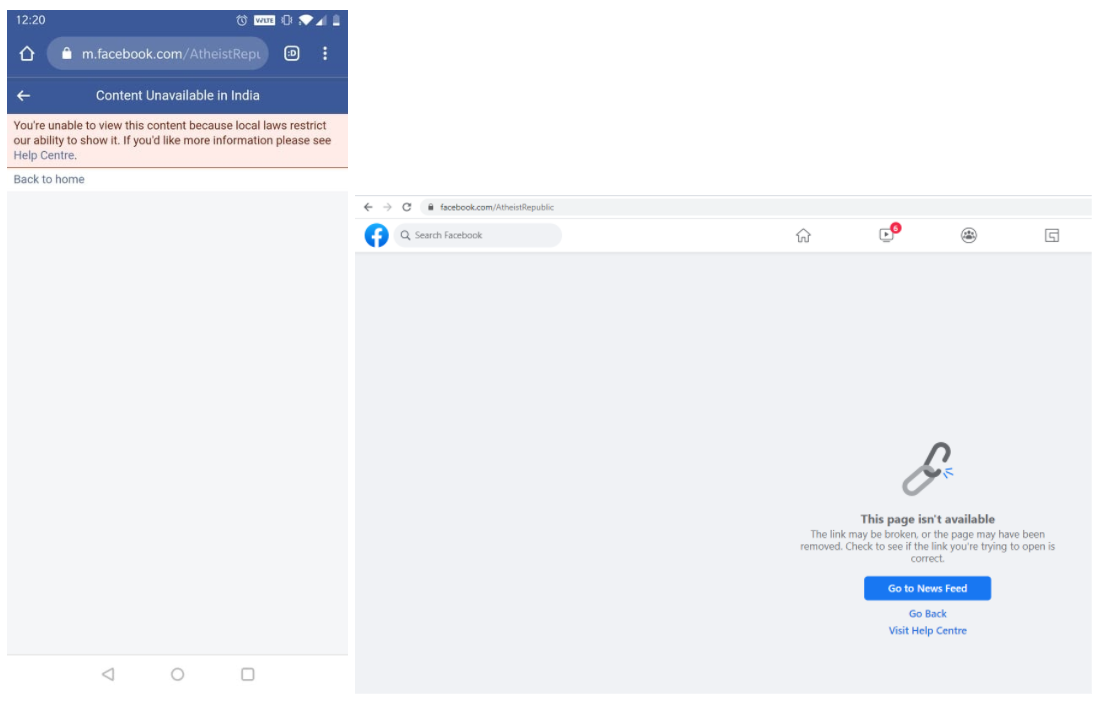 We have received no notice via email or in-app notification. This means that from a page of roughly 2.3 million followers, over 300,000 of our members, have lost access to our community and our engagement is completely neutered! Facebook is complicit in silencing the largest international community of atheists in the world, and essentially enforcing blasphemy laws. The only other country to block our page completely is Pakistan.

This is following the Department of Telecommunications in India blocking our own website on many Internet Service Providers (ISPs) on November 2nd 2020. We have received word from some of our members that they still have access to the main site, depending on their ISP, so it appears that this ban has been enacted on some major regional ISPs.

Screenshots from members in India:

This blasphemy against the Hindu Goddess Kali, simply by calling her sexy, lead to #atheism to trend in India for the first time, as well as #ArrestArminNavabi. Several First Information Reports (“FIRs,” a type of police report) and lawsuits were filed against him and Twitter India itself, including by a Vishwa Hindu Parishad (VHP- a Hindu nationalist organization) spokesmen. Even Bollywood actress Kangana Ranaut, with over 3 million followers on Twitter, went after Armin. We were subjected to: death threats, deep-faked porn of family members (much of which is still easy to find on Twitter), hacked accounts, and targeted-mass reporting campaigns that continue to this day. By September 26th, Armin was informed by Twitter that Indian Law Enforcement had launched an inquiry into the platform regarding his content that “violated the laws of India.” An Indian attorney even filed a Public Interest Litigation (PIL) before the Supreme Court to hold social media companies directly responsible for the content on their platform, and directly names Armin as a reason that the government should establish expert officers that investigate "hate speech." This same lawyer had posted that he filed a lawsuit against Facebook India and the Ministry of Telecommunications itself in a local Delhi court over our blasphemous content. He recently tweeted that Facebook took action following his petition. Armin had his Twitter account suspended twice since September due to mass-reporting. His final suspension came on November 10th, 2020, for “hateful conduct,” with the rejection of his appeal on Dec. 3rd.

The Supreme Court of India issued notice on February 1st, on the first PIL that was originally filed in October, that directly cites Armin’s blasphemy as a reason why social media companies should be held responsible for “hate speech” on their platforms. This attorney wants to regulate social media because of Armin’s posts, even suggesting that the government should establish experts in “hate speech” and “fake news,” so as to more quickly remove the content that could cause “communal disharmony”. This means that this matter will be seen before the Supreme Court in New Delhi.

My own Twitter account was suspended on January 16th 2021, with no email notification from Twitter detailing any specific violations, just gone. I immediately submitted an appeal, without knowledge of what I did that violated the platform’s policies. On February 17th, I was notified that my suspension was upheld, also for “hateful conduct” still without providing evidence of offending behavior. One day after the Better Business Bureau informed me that they were closing my complaint against Twitter after they contacted the business twice with no response.

These actions, especially the actions from Facebook, are a reflection of the Bharatiya Janata Party’s (BJP) influence in Big Tech, as revealed by investigative reporting at the Wall Street Journal and Time Magazine. The BJP is the current ruling party of India, the largest political party in the world, the most well-funded party in the world, and is a far-right party interested in promoting Hindu-nationalism, dubbed “saffron fascism.” Many supporters promote the formation of a “Hindu Rashtra,” essentially a Hindu-ethnostate. A reporter at the Caravan India covered our story, and spoke to a representative of Facebook who confirmed that the platform took action against us due to a government directive.

Many people have asked us why we continue to blaspheme despite the never-ending onslaught of abuse. It is simply because we feel that Indians should also enjoy the benefits of true freedom of speech like we have in North America (where we are based). In response, we have doubled-down and begun BlasphemousArt.com. This is art project is undertaken with the intention of promoting free expression, LGBT acceptance, normalizing dissent, and secularizing religion, as well as fighting sex-negativity, and challenging the blasphemy laws that result in death or imprisonment in many countries around the globe. There we update the site daily with previews of our sexiest blasphemy and offer a free booklet of our art to our newsletter subscribers. We have quickly learned the imperative of building your own platform that can not be taken from you, as many other creators and politicians have learned since the events of January 6th.

In terms of our goals and what we would like to see happen, firstly, we would like to have our platforms unblocked so that we can resume connection with our community in India. We want to fight back against this PIL in the Supreme Court in Delhi by working with local activists and civil organizations like the Internet Freedom Foundation India.

Secondly, we want to highlight to a global audience that the world’s largest, most well-funded party, is a far-right nationalist party with increasing influence in the social media platforms that we use every day. We want to raise awareness that one of the greatest threats to secularism, which affects roughly 1 in 7 people on the planet is the Hindutva ideology, which is essentially bringing back anti-miscegenation laws in India, destroying their free-expression and free press within their country, and attempting to enforce blasphemy laws overseas. I am greatly disturbed by the lack of global awareness for the Right-wing censorship in India that goes far beyond the cancel-culture that the Left is widely accused of here in North America. We also want to shine a light on the secular activists who are working inside of India, and the progress they make despite all odds, especially after experiencing firsthand the vitriolic abuse hurled against those who simply want to preserve their country’s secularism, tolerance, and democracy.