At the time of reinstatement, Armin Navabi, thanked the community,

This would not have been possible without the unbelievably huge amount of support we received. Thank you to all the members who didn't give up the fight to get their community back.

This brought tears to my eyes! Thanks to everyone who made it possible in having our AR family back! I literally jumped out of bed screaming after checking out a notification that some members are wanting to join Atheist Republic!

Members and fans of Atheist Republic have been rallying in support and finding ways to have their private group restored after Facebook arbitrarily banned it on January 8, 2015, without citing much clarity on its reasoning to its administrators or members. 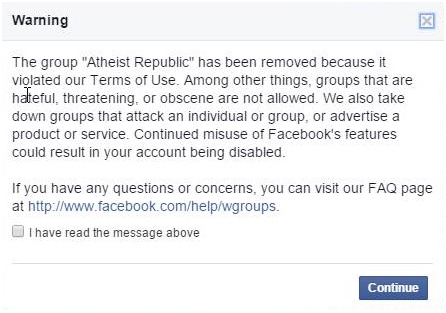 Later that day, via this post on its Facebook page, Atheist Republic let all its followers know that the private group with over 54,000 members had been removed by the social networking site:

On the same day that the group was removed, the founder of Facebook, Mark Zuckerberg made a post on Facebook claiming that he is committed to building a service where members can speak freely:

You deleted our #atheist group on some flimsy pretext bordering on nothing more than the paranoid delusions of some insecure believer… Your platform which was supposedly fostering free flow of information (though that changed a long time ago), is now at the mercy of intolerant bigots who can spam their complaints en masse and bring down groups which aim to serve as a bulwark against intolerance and bigotry… Before deleting or banning groups, do your bot admin even seriously attempt to understand why these groups are being targeted instead of acting like zombies on autopilot? This was a vibrant 50K plus group with an active coterie of administrators who acted quickly to remove any content which was in policy violation of Facebook… Yet you probably acted on the behest of rogue theists who infiltrated this group and complained about content they had no business viewing in a closed group.

Atheist Republic, which serves as a safe haven for atheists who want to freely express themselves in different parts of the world, formed the Facebook group in 2011. Its fans and members believe Atheist Republic has influenced their lives in more ways than they can express.

“The Atheist Republic private group has been a home to me for two years and now it's gone… Atheist Republic has successfully given voice to men and women from all over the world who risk death to be among like-minded friends. I've witnessed suicides prevented and several meetings that resulted in marriage. This was a group providing a necessary safe harbor for everyone from the LGBT community to atheists living in Pakistan, Iran, Saudi Arabia, Egypt and other countries, where atheism can potentially lead to death sentences. These people were my family and now they're just gone… Please, I want my home back,” said group member Joe Bullington.

Yet another atheist, Chey Miller, said,

“Atheist Republic is a wonderful place for people who have nowhere to go. I found AR when I had no one to turn to and the people here made me feel a part of something wonderful. I hope they put it back on Facebook… Atheist Republic provides a safe haven for so many and it is home for many of us that need one.”

The reason given by Facebook for blocking the group, which had grown into a community of sorts for atheists across the world, allegedly stemmed from several reports on threads started by group members themselves. However, as was pointed out by administrators, the group was private and thus inaccessible to the general public.

Another Atheist Republic member, Thomas Fry, pointed out that the group in concern was a large one and still, it was one of the better-moderated groups on Facebook. While it was impossible for moderators to have ensured hate posts do not appear on the wall at all, the entire team working arduously for Atheist Republic made sure every such post was brought to an admin’s notice at the earliest moment possible and taken down as soon as possible.

“Terrible things are done in the name of religion sometimes and we always strived to give people affected a safe place to vent. We have a dedicated team of 14 administrators and 20 council members working towards that goal. Hate has never been tolerated - not just on principle but on a personal level as well… Being critical of ideals or actions carried out in the name of religion is not hate… Attacking people or making broad claims about a huge group of people could be hate, and while we saw some of this, it was not tolerated. Posts were removed and posters were warned and referred to the rules, which explicitly prohibit hate speech.”

“This is fucking insane! Facebook deleted Atheist Republic and they shouldn't have. Atheist Republic has been one of those heavily moderated pages here on Facebook. As one of the admins, I don't see any reason why it was taken down because all reported posts/comments that violate FB's ToS are taken down right away. I feel like crying. I just can't believe this is happening.”

Atheist Republic founder Armin Navabi was distraught at discovering Thursday’s developments. Stunned at Facebook blocking a secular group that he had hoped would empower and protect nonbelievers, Navabi said Facebook’s reasoning for taking down the group makes absolutely no sense.

“The group was extremely well moderated. We have an admin team and a council to represent the members as well. This is the length to which we have gone to keep the group clean.” he said.

Upon being asked what are the chances of having the group unblocked and restored, Navabi said his team is still trying to figure out a solution. From what Navabi has managed to research so far, he believes the group could be brought back if several people chose to report the issue.

Here is the information for anybody who wants to go to the above link and file a complaint:

Atheist Republic continues to investigate whether its Facebook group was blocked after a planned attack, as several other groups seem to have experienced the same in the past. Fans and members of the community would welcome any information, advice or suggestion from well-wishers who can help them understand how to go about solving the current situation.

“Many of our members are reporting the group as missing to Facebook… We are trying to not jump to any conclusion as to why we were removed but are still looking for answers and a resolution,” said Atheist Republic administrator Allie Jackson.

Of course some members of the community have drawn attention to the fact that while Atheist Republic has been subjected to such discretion, several other hate-inducing and obscene pages have been allowed to stay on Facebook. These critics have raised questions as to how a group like Atheist Republic could be banned by Facebook when a page titled ‘Death to Israel’, for instance, "doesn't violate Facebook’s community standards" according to Facebook. 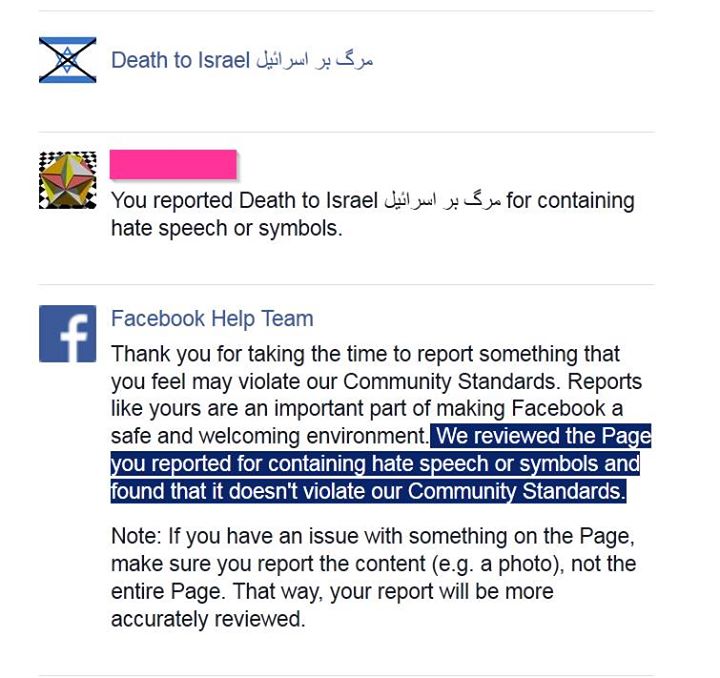 In the midst of this incident that has disheartened several atheists and nonbelievers, the light at the end of the tunnel seems to lie in the fact that support has been pouring in from all quarters. While some individuals from the community have urged Atheist Republic to take up the concern with high-profile secular organizations like Richard Dawkins Foundation, Debra Renee Thornton Griffin, who claims not to be an atheist, said Facebook’s decision to block Atheist Republic’s group is indeed shameful and outrageous.

“I am not an atheist, but this is outrageous and shameful. I sincerely hope that you are able to find the solution and can reopen your group. Everyone should have a safe place to speak and express their views and receive support from friends,” she said.

In conclusion, Lawlie Byte stressed how disillusioning the incident has proven to be and hoped she and her friends from Atheist Republic would not have to make a new group and start afresh.

“Our admins and council members worked extremely hard to make a safe group for atheists to have a sense of belonging. We may not tolerate religion but we never stood for hatred and bigotry. The banning of our group for what we never stood for? A slap in the face for us. That is not what we are about. Now we have to fight for our right to have a safe place to talk without worrying what people may think. It's a sad day for us.”

Facebook Bans Popular Atheist Group, Fans and Members Rally in Support. WHY did they ban it? WHY? http://t.co/o9Hh9pumpO