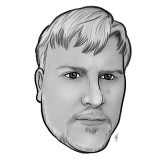 I was brought up in England in no particular religion; though, in the 1970’s, everyone assumed you were Christian unless you told them otherwise. My exposure to Christianity was limited to school and the scouts. Religion was never discussed at home. My mum gives a vague nod to Christianity at funerals and weddings, and my dad is an atheist. I have been a lifelong atheist. My major axes to grind with religion are pollution of education, and discrimination in the name of religion. I am also in favour of all law being secular. I work in secondary education and see first-hand how a more secular Britain is benefiting children.

Please login or register to create a new forum thread