Eminent physicist Neil Degrasse Tyson coined the phrase "the perimeter of ignorance" to describe the point when otherwise intelligent people stop trying to figure things out for themselves, and instead insert a supernatural explanation to explain the things beyond their current understanding. He uses Isaac Newton as an example of the effect this can have on scientific inquiry.

When Newton was developing his theories of motion and universal gravitation (no small feat by any stretch of the imagination) he attempted to use his new understanding to work out whether the orbits of the planets in our solar system are stable over the long term, ie: tens of millions of years. The problem he ran into was that while his newly developed calculus worked well in predicting the orbits of any two bodies in the system, for every other planet or moon he added to his formula, the formula itself became more and more unwieldy, becoming impossible to use before he'd had reached the limits of the known planets and moons of his day. Now obviously Newton was no intellectual slouch, and Professor Tyson (no slouch himself) believes, that had Newton persevered with his endeavour, he easily possessed the necessary skills and intelligence to have worked out Perturbation Theory which allows for a solution based on the gravitational interactions between all of the bodies in our - or any other - solar system.

Instead, Newton chose to invoke God's intervening hand to impart stability to the system over the long term. By invoking God, he effectively abandoned his work, crossing the perimeter between scientific enquiry and the ignorance of superstition. His choice held back a solution to the problem for another century. 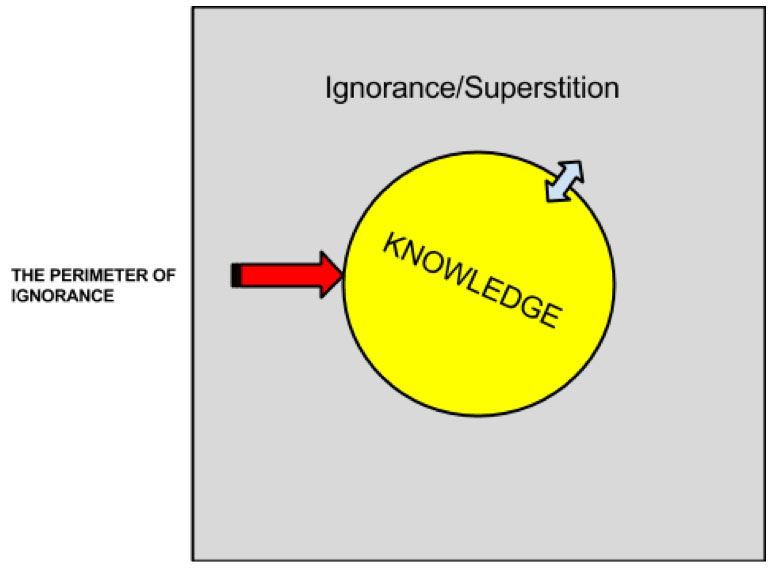 The above illustration graphically demonstrates the magnitude of the problem we, as non believers, face in our quest to rid the world of behaviour based on superstition. If an intellectual giant like Newton can be convinced of the reality of an invisible DIvine being, what chance do the rest of us have of bringing reason to the billions of followers of these same mythical gods?

We will never eradicate ignorance. One of the features of scientific progress seems to be that as soon as one question is answered, two more come into focus of which we were previously unaware. This also can be paraphrased as: the more we learn, the more we realize we don't know. Of course science regards this as a good thing. Superstition on the other hand actually attempts to push back against the sphere of knowledge by supplanting facts with baseless propaganda. The purveyors of superstition employ trickery and deceit as tools in their never ending quest to indoctrinate the young before they can develop the ability to critically analyze and separate opinion from fact.

If we can one day remove the shine from religious belief; eliminate the favoured status religious organizations hold exclusively in our society; push back against the inroads faith is constantly trying to make into our public institutions, and bring more people on board with the necessity of improving our public educations systems, then maybe we stand a chance.

I guess the question then is "Do we really need to!"

Given our technological achievements, mankind can ill afford to allow the vagaries of the world's collective mythologies to control access to powers they do not even care to understand. People who actively aspire to the end of the world are more likely to achieve it. People who yearn for perfection in an afterlife are more likely to forgo striving for perfection in this one.

Hi folks, Andrew McArthur here. As a musician and writer, I’m not usually without something to say. I am also incredibly fortunate to be among the few who’s right to speak remains sacrosanct. I believe those of us who can speak out, have an obligation to those who cannot. The dogma of faith; the father of lies is an anathema to reason. The faithful are marching, endlessly marching toward the fires of superstition and fear. Extremist views scream loud. What shall our answer be?

Explaining Theism and Atheism to Kids

Christians, the Devil is a Courageous, Conscientious Objector

When Religion Stayed Out of the Funeral

Religion: Womb of Arrogance and Irrationality