It seems Rachel Maddow has personally upset the king of creationism himself, Ken Ham. Ham is the owner of the Creation Museum in Kentucky and owner of the creationist propaganda site Answers in Genesis (AiG), whom Maddow outright lambasted on her show this week.

AiG has been on the defensive for months now as they come under attack from the science world each week with Fox’s new hit series Cosmos, in which host Neil deGrasse Tyson explains the actual, evidence based origins of our universe and the diversity of life on our planet.

But just this week the Creation Museum unveiled a new dinosaur exhibit valued at $1.5 million, that features fossilized Allosaurus. A funny thing for a creation museum to show off, seeing as how dinosaurs outright disprove the ridiculous claim that the earth is only 6000 years old.

However, the exhibit opened to much media attention and Maddow took notice and on her show, The Rachel Maddow Show, she let them have it. She reminded her viewers that fossils are a problem for creationists. As they are, they can be properly dated and show the timeline of evolution on earth, yet Ham and his cohorts at AiG have a different story to tell.

AiG tells a story that claims this dinosaur’s remains show that it was killed due to the great flood from Genesis. This is a claim not backed by any non-creationist science organization and has no peer-review data to back it up. It is simply a claim made by AiG that they would like you to take as truth.

Maddow then shifted gears to the silly fossil claims and highlighted that this exhibit is part of a bigger picture at the museum, as they are in the process of building a Noah’s Ark “encounter,” a theme park if you will, about Noah’s Ark. This is not being done solely with private money, but by bringing in a whole mess of church/state separation shenanigans. Yes, they are fundraising privately, but a slew of tax exemptions are helping along the way.

Maddow points out that the state of Kentucky offered the museum $43 million in tax incentives to build this religious monstrosity, a claim that Ham tries to dispute improperly, saying, “No Kentucky taxpayer money is being used to construct the Ark Encounter.”

Ham is right, no tax dollars are being used, but Maddow didn’t say that, as biologist PZ Myers points out on his Pharyngula blog:

Maddow says quite clearly several times that the Ark Park has been given $43 million in tax incentives — that is, Answers in Genesis has been exempted from a requirement to pay taxes on their for-profit enterprise, and will also receive rebates on sales taxes. So all Ham has done is rebut a claim that Rachel Maddow did not make.

Ham deliberately misleads his readers to believe that Maddow is outright lying and that the secular media is out to slander him and his organization, yet in the video and transcripts, Maddow never once makes the claim Ham accuses her of.

Ham points out that Maddow is angry, and of course she is. Tax dollars are being diverted away from the state and left in the hands of Ham and his museum to drive their profits up, all while offering no charitable service to the people. Ham of course thinks she is mad at something else, saying Maddow is, “obviously upset and angry, but, in reality, she is angry at God.”

Of course, one cannot be angry that a museum is lying to patrons and giving them a false, scientifically disproven concept of the origins of life, and then trotting them off to a theme park that insists the millions of species on this planet fit onto one boat and were saved by Noah, and then do so on a $43 million tax break.

In closing Ham slams Maddow for, “[…] Sleazy tabloid approach in her attempts to bring disrepute to creationists,” all the while never addressing the facts she actually raised in her piece. As Myers puts it, “Deny, deny, deny…pretend the facts aren’t out there. It’s the standard creationist play.”

Don’t bother Ham with the facts; he has a profit to worry about.

I am the author of Parenting Without God, How to Raise Moral, Ethical and Intelligent Children, Free From Religious Dogma. I blog for the Patheos Network under the title Danthropology and I am also a freelance journalist for AlterNet, Salon and The Huffington Post. I am a special correspondent and columnist for American Atheist Magazine and am a former editor and writer for The Richard Dawkins Foundation. 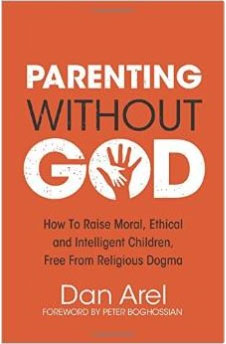 It Takes More Faith to be an Atheist

7 Reasons Why a God Would Love Atheists

The Passion of the Atheist - Liar Liar

Take a Look, It’s in a Book