The photo above was recently shared to our Twitter and Facebook accounts, and we've received many lovely responses from the Islamic community about this image. It is of course a Photoshop image, because let's face it, Islam will be the last religion on the planet to come into the modern age. The fact is that the Kabah will probably be torn down before it is ever draped in a rainbow flag. And honestly, that's the real reason why such images are necessary. Because we will never see such an embrace of love and equality from the Muslim world no matter how "moderate" they claim to be.

Legalizing gay marriage in the United States was a step in the right direction. Let's also remember all others that live...

So I want to share some of these responses with you all, and put on display the "love" and "peace" that Islam breeds in the minds of its adherents. Please keep in mind that these aren't members of ISIS or Al-Qaeda making these statements, but rather are your everyday average Muslim. This... is a "moderate" response to a simple harmless picture. 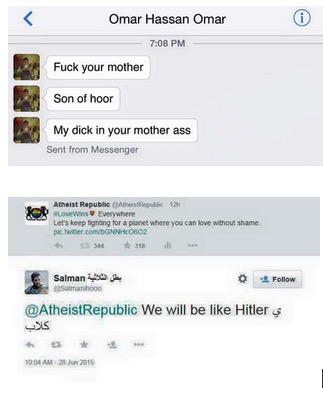 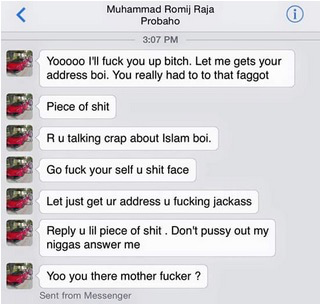 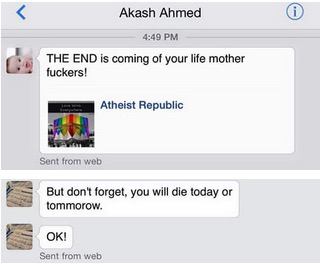 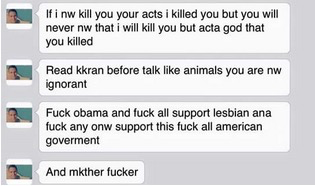 Those were all very lovely, however one of my favorites is the following: 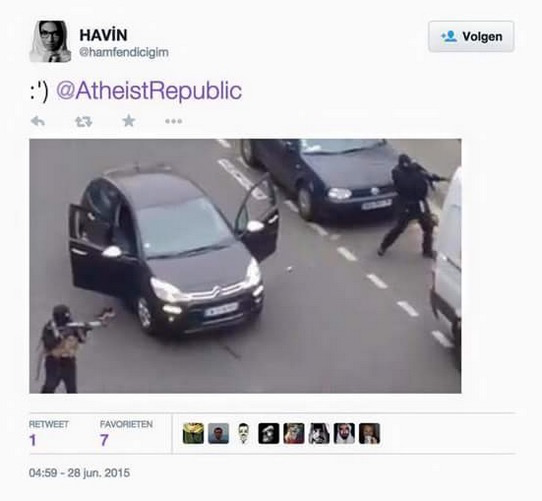 Such a lovely passive aggressive post. Too cowardly to just come out and tell us they want to kill us, so they post a picture of a terrorist act to make their point. Of course, this photo was too tame for another who commented, and so they sent us this lovely image instead: 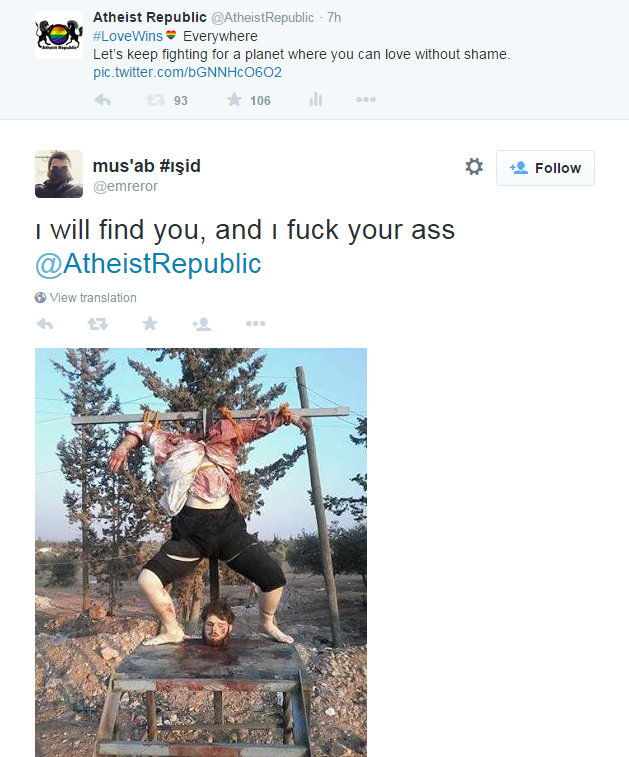 Now, for such a homophobic group of folks we sure have received a lot of invitations to have these folks fuck us in the ass. Apparently the logic there is that gay sex would be a fitting punishment for homosexuality, which begs the question whether these folks understand anything at all about homosexuality. Of course, even a gay man probably has no interest in having sex of any kind with a bigot.

Again, these aren't extremists or jihadists, they're just average Muslims. These are the ones who call themselves "moderate". They call themselves "moderate" simply because they themselves aren't out killing people in the name of Islam, but one look at these comments will tell you that they simply hadn't found what they're willing to murder for until now. But we can be sure that many of these people, if given the chance, would gladly follow through with their threats.

To make it clear that these are supposed "moderate" Muslims, I'd like to point out that we know for a fact that one of these men is a US citizen. This particular commenter has specifically asked for information from one of our admins that he suspects lives in his area, and threatened said admin with physical violence against this admin and their family. These aren't just some harmless comments from random strangers, but from people with a real interest to do very real physical harm to members of our team, who live right in our own towns and cities. And should any of our members in Muslim countries be outed, they would surely be in very serious danger. It's even worse for them because their own governments may in fact put them to death simply for being an atheist.

The most telling thing about this is that, these are literally just a handful of the threats we've received over just this one image. The reality is that, were I to share all of the threats we've received it would take all our bandwidth to do so. We receive threats on a nearly daily basis for everything from the most benign criticism of religion to things which could be considered highly irreverent and "blasphemous". We receive threats against us as individuals and threats against our organization. Threats against our families who have no part in all this. Threats of torture in this life and the promise of future torture in an afterlife.

But do you know what? It won't stop us. We'll be doing the same thing tomorrow that we've done today, and as long as this organization exists we will continue to do what we've always done. We share factual information and we share personal criticism. We share what makes us laugh and what makes us cry. Above all else, we share honesty, whether it comes in the form of factual information or whether it is the thoughts, feelings, and ideas of our team, it is all honest. We aren't going to cater to the dysfunctions of others and coddle them. We are going to offend many people out there, because when your life is based on a lie, nothing is more invasive and unwanted as honesty. But we're also going to open up some people's eyes and minds, and that is why we do what we do.

#LoveWins Everywhere Let’s keep fighting for a planet where you can love without shame. pic.twitter.com/bGNNHcO6O2

This image and the message it offers is not one of hatred, but one of love. And if you're against love and equality in any form, then I'm sorry to say, but you are an enemy to all that we stand for and we won't be bullied or intimidated into silence.

"If there's one thing I've learned from video games it's that, when you run into enemies you're going the right direction." - Anonymous