Chaplains in the U.S. Military provide a vital service to its personnel and since the chaplaincy was first instituted, Roman Catholics, Jews, Hindus, Muslims and most recently Buddhists and Humanists have all faced resistance in their attempt for representation and support.

Currently, Christians make up more than 95% of the chaplaincy and because more than 20% of military personnel claim no religious connections, there has been an increasing demand amongst atheist and humanist groups to provide a more representative presence in the U.S. military to support the growing numbers of non-religious service men and women.

Even though there are currently more than 200 endorsing agents recognized by the Defense Department including Buddhists who do not claim a deity, and there are currently Buddhist chaplains employed by the U.S. Military, there are no other non-theistic organizations on the approved list. Which means atheists like Jason Heap cannot currently be hired as chaplains. Heap is a graduate of Brite Divinity School and Oxford University and has the endorsement of the Humanist Society, an organization not currently on the list of approved endorsers for U.S. Military chaplaincy.

In June, U.S. Representative Rob Andrews (D-NJ) suggested an amendment to the 2014 National Defense Authorization Act that would expand the conditions for military chaplaincy to include people from non-theistic organizations that are not currently on the list of approved agencies. The amendment failed in the Republican-led House 43-18.

Apparently, this loss wasn’t enough for some Republicans. Demonstrating a patent misunderstanding of military policy and atheist beliefs, later in July, Rep. John Fleming (R-La.) sponsored an amendment (attached to H.R. 2397, the Department of Defense Appropriations Act of 2014) in an attempt to explicitly forbid atheist chaplains from being appointed. It prevented “funds from being used to appoint chaplains without an endorsing agency” and passed the House 253-173. It will now go on to the Senate.

While seen as a victory by supporters, Jason Torpy, president of the Military Association of Atheists and Freethinkers, clarified that military regulations already require chaplains be endorsed — and not necessarily by an organization of believers in a divinity. In addition, under the Constitution, Congress cannot exclude an atheist from military chaplaincy. The Department of Defense can only require a candidate for chaplaincy to meet educational requirements and possess a statement of status that comes from the endorsing body of the candidate's tradition.

Which essentially means the primary challenge of atheists in the military is to increase the number of approved endorsing agencies that are non-theistic.

In practicality, this move means very little to change the chaplaincy process in the U.S. military. However, it definitely demonstrates a continued and pervasive distrust of non-theists and a misunderstanding of the role of chaplain in the military.

9/29/13 The original opening paragraph in this blog post was worded in a way that could be misconstrued. The current paragraph reflects an edit to make it more clear. 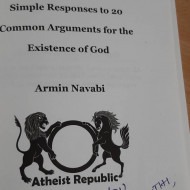 I am a graphic artist, mom to two girls and wife of an actor. I enjoy dancing, reading, knitting and I might be a little obsessed with podcasts. I spent the first 31 years of my life as a passionate evangelical, Pentecostal Christian (12 years of which were spent as a minister) and am now trying to find my dance outside of religion.

What If We Ban “Islamophobia”, or Even All “Religio-phobia”?

God Does Not Play Dice