Eric’s first two premises are, to put it very mildly, less than stellar. So far we’ve been given an analytic statement which doesn’t have any scope outside of the meanings of the words themselves, a synthetic statement which sounded mundane- yet contained unclarified, loaded language which could be used for equivocation later, and no evidence whatsoever to bridge across the analytic-synthetic distinction. Let’s see where he goes from there.

Eric has a habit of misusing words like proof and evidence. More specifically, he overuses them in reference to his own arguments. Evidence is a complex concept, and there are different types and standards of evidence. Eric failed to clarify what sort of evidence he thought he was giving, so it appeared as if the repetition of the word itself was used as a tactic to strengthen his case in the minds of listeners. Even under the most generous definitions of evidence, I hardly think assertions and analogies would count. Assertions and analogies are all Eric has offered so far. Eric’s third premise is basically a conclusion to a syllogism which he built from his first two premises, and he seemed to offer the conclusion as proof of itself. Rather, he offered the validity of the conclusion as proof of its truthfulness. This is a huge mistake. It’s at this point that things really derail for Eric’s case.

The Sound of Validity

There are two considerations when evaluating a deductive argument like the one Eric presented: validity and soundness. An argument is valid if the conclusion necessarily follows from the premises. Validity refers to the form of the argument.  Eric’s assertion that something must necessarily be eternal in no way follows from the first two premises he gave. Neither premise mentioned anything about being eternal. If there’s new information in the conclusion which wasn’t in the premises, then it didn’t get there deductively or validly. This is about the best Eric could do with a third premise and it still be valid:

In order to validate his third premise as he stated it, Eric has a lot more building to do. His leap to the necessity of something being eternal is completely unjustified with the current form. But even if he were to add enough premises to his argument and make it valid, he still couldn’t claim it was true because it wouldn’t be sound.

An argument is sound if and only if the argument is valid and the premises are actually true. Soundness refers to the content of the argument. Another fatal flaw in Eric’s argument becomes evident at this point. If his argument thus far is to be considered sound, then he would need to provide real-world evidence that his premises accurately describe reality. This would require demonstrating that nonexistence is not only a possible state of being, but was an actual state of being at some time in the past. Eric didn’t even come close to doing this. He didn’t describe it at all, let alone coherently enough for it to justifiably be considered even possible. His argument isn’t sound, so he can’t possibly be justified in claiming that it’s true.

Eric attempted to necessitate an eternal something, but he didn’t offer any clarification of what he meant by that. I doubt Eric would’ve been able to give a definition which was both coherent and consistent with viable cosmological models, and that would have rendered his third premise nonsensical. A deeper issue is that Eric is getting into an apples-to-oranges scenario. He’s moving toward the Big Bang without taking quantum mechanics into account, and he’s assuming that classical descriptions of spacetime and causality are absolute and binding since that’s what he rests his argument on. As Sean Carroll pointed out in his debate with William Lane Craig, these classical descriptions begin to break down at the quantum level 2. That hardly makes them an ironclad source of truth about the earliest moments of the universe.

Eric has offered absolutely no actual evidence so far, and he’s sticking closely to what seems obvious and intuitive. In fact, he seems to be discounting anything which isn’t obvious or intuitive to him. What he fails to realize is that the laws of the universe aren’t inviolably bound to function in ways which are obvious, intuitive, or easy to understand. At the end of three of his premises, Eric hasn’t built anything with any validity or soundness. As we’ll see, things are about to take a turn for the weird. 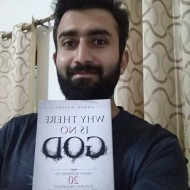 I’m not exactly sure where the buckle of the Bible belt is, but I’d bet it’s within a stone’s throw from my hometown. My two beautiful children keep me on my toes and keep me laughing. I enjoy gaming and watching movies, preferably while eating buffalo chicken. I also enjoy doing video and machinima projects as well as composing an occasional profanity-laden haiku. After nearly 20 years as a Christian, atheism has been very liberating for me in all areas of life. The view is infinitely more beautiful from here.