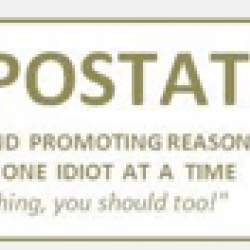 The Trouble with Religious Zeal

Recently I commented on a Facebook page, typical of the religious zealots out there who demand that you 'like' a certain page in order to make something wonderful and magical happen. Usually, it's an old picture of some poor, unfortunate person in a state of acute hardship, distress, pain, suffering - you get the picture. There's usually a statement about how the person in the picture can benefit from Facebook intercession with all the likes and 'Amens' (or 'Ameen') and comments on how Allah can make all things well again.
Boy, oh boy, does it get my blood boiling.

I answered one such request for a 'like', which quickly turned into a debate between a seemingly literate and very articulate young lady from Pakistan and myself. I commented on how her country was a failed state owing to its adherence to its religious doctrines - none of which could possibly hope to make a blind bit of difference to the state of the nation. I said a lot of things. I made some simple assertions and commented on how Pakistan needed immediate reform.

In stating, as I did, that the people of Pakistan need to dispense with their religion, I was trying to point out that freedom of expression, freedom of THOUGHT and freedom of action are all alien concepts to a nation driven by its adherence to the Islamic faith, which is a very backward way of living in a modern democracy - or one that purports to be a democracy. Faith simply doesn't do anything to forward the nation's progress, nor does it do anything to promote anything other than disharmony because it is such a divisive force. People should be free to believe whatever they want and act in any way they choose, as long as it is for the greater good and for altruistic reasons. One CAN be good without god, as I tried so hard to explain.

However, this said, without better government, better structuring of a democratic republic, elimination of over-zealous Mullahs in their backwards madarassas and so on and so forth, the country will continue to look to the west for aid at the same time as condemning them for interfering with their nation state. Pakistan has so much going for it, but it is being held back by much of what I originally suggested. When you have a country so rich in natural resources, you need an educated populace to do something about using those resources in a better manner. Like it or not, the truth hurts and the simple truth is that following one's religion doesn't put food on the table, grow the economy or provide real hope for the massive majority.

The real issue is the nation's terrible literacy rate. Education for all is a NEED, not a want. Make people better educated and their minds might be freed of the shackles of a backward mentality - but this is a KNOWN threat to those in power and those whose closed minds remain unalterable. Women, especially, need to be able to do more than be married off early and to bear children to continue the same old sad cycle. Educate the nation's women, bring about a secular humanity and do something to rid the country of corruption on a massive scale and you might have a wonderful phoenix one day.

It saddens me to think the land of my forefathers is so hell bent on its own destruction. Since separation, what, please tell me, has it actually managed to achieve? I mean, really? Mentioning one or two successful physicists or someone in the field of medicine is start, but it's woefully inadequate. Blinkered vision owning to blinkered faith has reduced it to a shell. However, this is by no means the end. It should be the start of something glorious. Democratic freedoms and EDUCATION on a scale never before seen is what really matters.

Secularism can offer some of this. There's nothing wrong with believing what you want privately, but matters of faith and religion should not be the major factors in how to run a nation state. I just think people need to dispense with what makes human beings truly monstrous and, above all, dishonest. And it is a terrible shame.

So, what did I neglect to say or state here erroneously?

@Liandro - done! Sorry, I originally posted from a cut and copied Word document I'd saved from my FB but neglected to separate into readable and manageable paragraphs. I agree with what you said. Next time, I'll try my best NOT to rush something so important. Cheers brother!

I think their religion is

I think their religion is good for what should be thought to the followers like love for others etc. But there are really some areas that seem to be victims of those who want more power and starter of wars.

Likely impossible to change her mind, she'll have to do it on her own, maybe you've helped her have some things to think about. Without reading her replies it's hard to say what's been missed if anything, she'll just have to look around and see that Allah hasn't done much of anything in the 1300 year history of Islam, why continue making a mistake. Anyhow,appreciate the fix.

Education is very important not just in your country but anywhere in the world. Poor education can lead people into becoming puppet who are controlled by their own government and religion. I'm so sad with all the misfortunes that Pakistan had been experiencing for decades.

Agreed. Unfortunately, the powers that control these states, as they do in so many others, want to tightly control education so that only the knowledge that suits them best is taught, and to create just enough life stress to occupy the free time of citizens so that they don't seek out education further than what looks absolutely necessary.

Agree that education is very

Agree that education is very important no matter what the majority there are believing and what are the status. Also agree that it is a right of everyone in order to have better opportunities especially in this world that diploma or degree in school matters.