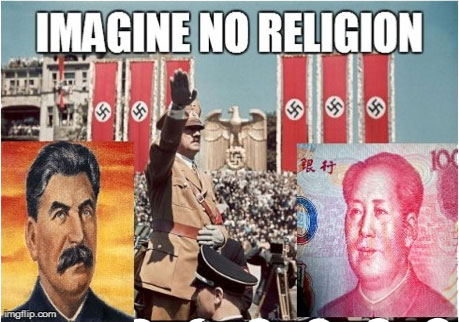 Religionists have created it as an answer to the intended meaning of "Imagine no religion", all the while not comprehending that, just like religion, Communism and Fascism are totalistic, closed ideologies too (take a seat friend, you ain't one no point). Still though, I really like this meme. I like It because it reminds me that the fight I am waging isn't against religion in particular, but against all closed ideologies in whatever form they take, and ultimately, the hard­wired human imperative that produces them. 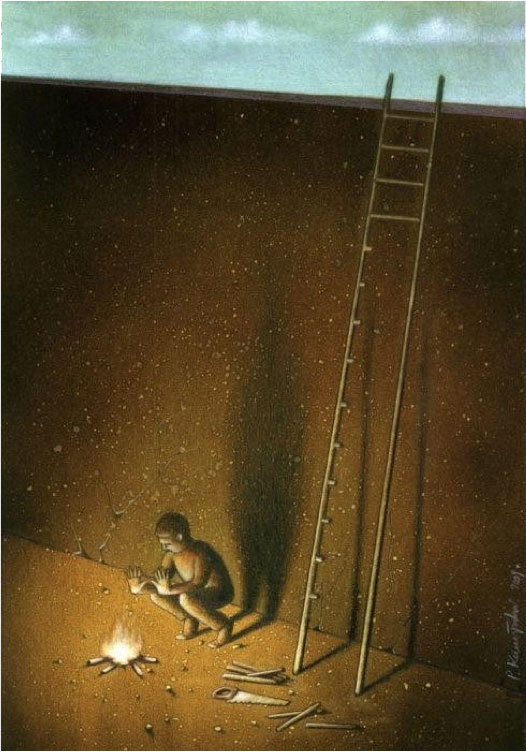 I am not too much looking at the structural level of things (it is a repeat, a continuous loop). Nothing changes when we tinker with structure. We only shift power balances or create power voids, which are then only filled by a new orthodoxy, a new hierarchy and a new power. Ultimately though, its the same structure with new faces. Or it amounts to having lesions all over and we only have one band­aid and we just move the band­aid around and around, trying to stop whatever lesion is hemorrhaging most until we finally slow­bleed to death. If there are any net gains, they are only temporary at best. I do understand the seduction of engineering at the structural level, for one
thing, you can actually see the appearance of "change" in your lifetime, but we have a time

imperative to consider now; we have weapons of mass destruction and ideologues that are prepared to use them. We don't have time to exclusively focus on structure anymore. Those days are gone (they've been gone for a while). 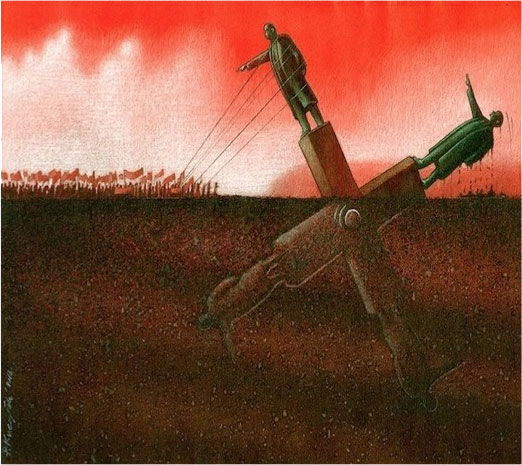 No, rather than wasting more time toying with structure, my sights are set on you and me (shit gets personal). My battle (the awakening I'm looking for) is against the root cause of all
the structural madness. It is the human pathological mind (yours and mine) that is the architect of the superstructure and the structure will never change (has it yet?), if we don't start looking at and treating the actual disease:
the human species (us) and our hard­wired imperatives. If we simply tear down or amend the structure without treating or even acknowledging the source, we are simply doomed to re­build it again (haven't we always?) No amount of structural tweaking is going to remedy our shared psychologies and their collective need to manifest lethal structures. A psychological imperative will always find a way to manifest; it will always create a structural form for which to express the underlying need. And so what if a few places in the world become more secularized? The same underlying imperative will inevitably rear its ugly head and manifest in the political realm or whatever other realm available (hasn't it always?)

The End of Self Delusion

No, our focus in the 21st century has to get to the root of the problem. The only science of importance now, the only knowledge pursuit that will save us from ourselves, is Human Behavioral Psychology. We have to study ourselves as a species, objectively, like we would with any other species. We need a collective perceptual shift to thinking about our own thinking. We have to drop our vanities and conceits and see ourselves for what we really are and then we have to internalize that knowing, that information, so that we don't fall prey to our own hard­wired behavior. Because its killing us every day and chances are it will eventually take us out entirely.

I am a middle-aged, gay brotha who rocks it west coast style: smoking tree with the homies and listening to ol' skool gangsta rap. Humans are annoying, so I prefer other animal species (I have a six-year friendship with a northwestern crow). I credit the illustrations of my childhood catechism reader for my obsession with Middle Eastern brown bois; I tend to eroticize religious fanatics - Osama was da bomb!

How Much is Prayer Worth

5 Reasons Why Angels are Nonsense – Even for Christians