Ok, so I would like to start off by saying that I have nothing against Muslims. In fact, a lot of my good friends are Muslim and most of them are kind, thoughtful and wouldn't dream of hurting anyone. Unfortunately, the same cannot be said for the evil, twisted and out of date religion that they follow. So before I start talking about the diabolical passages in the Quran or the heartless acts caused by Al Qaeda, I would like to start by Talking about "Eid".

According the BBC Religion website, "The festival remembers the prophet Ibrahim's willingness to sacrifice his son when God ordered him to." Is it just me, or is it absolutely ludicrous that people actually celebrate the fact someone killed their own son, without thinking or questioning, just because "Allah" told them to? If that happened today, Ibrahim would be arrested, and rightly so. And, as if that’s not enough, the Website then goes on to say, "Today Muslims all over the world who can afford it, sacrifice a sheep (sometimes a goat) as a reminder of Ibrahim's obedience to Allah." What the fuck? Not only is someone's craziness celebrated, creating an excuse to get out of work and school, but sheep are "sacrificed.” That sounds really rather Satanic to me.

But it's not just Eid that really boils my piss.

The Quran (just like the Bible) has loads of foul and vile passages.

"And kill them wherever you find them, and turn them out from where they have turned you out. And Al-Fitnah [disbelief] is worse than killing"
"..who abstain from sex, except with those joined to them in the marriage bond, or (the captives) whom their right hands possess...".

Both of these are horrible passages that no civilized person would even want to obey. If all Muslims obeyed their Quran word for word, my view on them would be a LOT different than the way I described at the beginning of this article.

Following on, their Prophet Muhammad ( who seems to piss off a lot of people when you draw him) was a nasty, disgusting and unpleasant Pedophile.

So that passage is saying that he got married to a fucking nine year old, and in a passage I mentioned earlier in this article it basically said, "Only fuck people you’re married to or you own." I can't believe some of my very good friends actually look up to and idolize this monster. I should tell them, but I simply don’t have the courage to say "Hey, your prophet is a kiddy fucker."

Even though a lot of religions have gory origins and out of date holy books, Islam appears to be the one that is causing the most damage and the most violence at this time.

I said at the beginning of my article "a lot of my good friends are Muslim." I suppose what I actually meant was "a lot of my good friends call themselves Muslim." Because if they acted the way the Quran told them to, they would be like Al Qaeda. However I'm extremely glad that they're not. But what I would love is if my "Muslim" friends, even just one of them, were to research their religion like I have and admit that it is not a very nice religion. I would be so overjoyed and happy, that I'd tell them, "Well done."

The picture I drew, while it may not be a work of art, is very blasphemous. I have drawn the prophet Muhammad (who you shouldn't draw, but people do on "Draw Muhammad Day") with no clothes expect a bra made of pork, to cover his nipples, and a burning Quran to cover his junk.

The sources I have used are a tad biased, and so is this article if I'm perfectly honest. 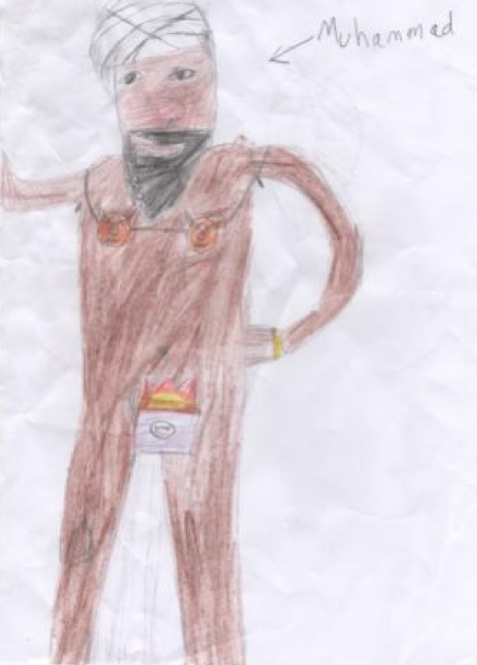 I call myself Dinosatan because I adore dinosaurs and calling myself Satan will hopefully piss off a few fundies. I haven't had a particularly religious upbringing which I'm quite happy about. When I grow up, I wouldn't mind being a writer; I mainly write fiction but I also love to express my passions and opinions through articles. As well as an atheist, I'm also an anti-theist who believes that religion holds back science, causes violence, and makes no sense.

Did You See What God Just Did To Us, Man?

What is God? An Objective Overview of Different Views and...

To The Addict: An Essay on Perspective